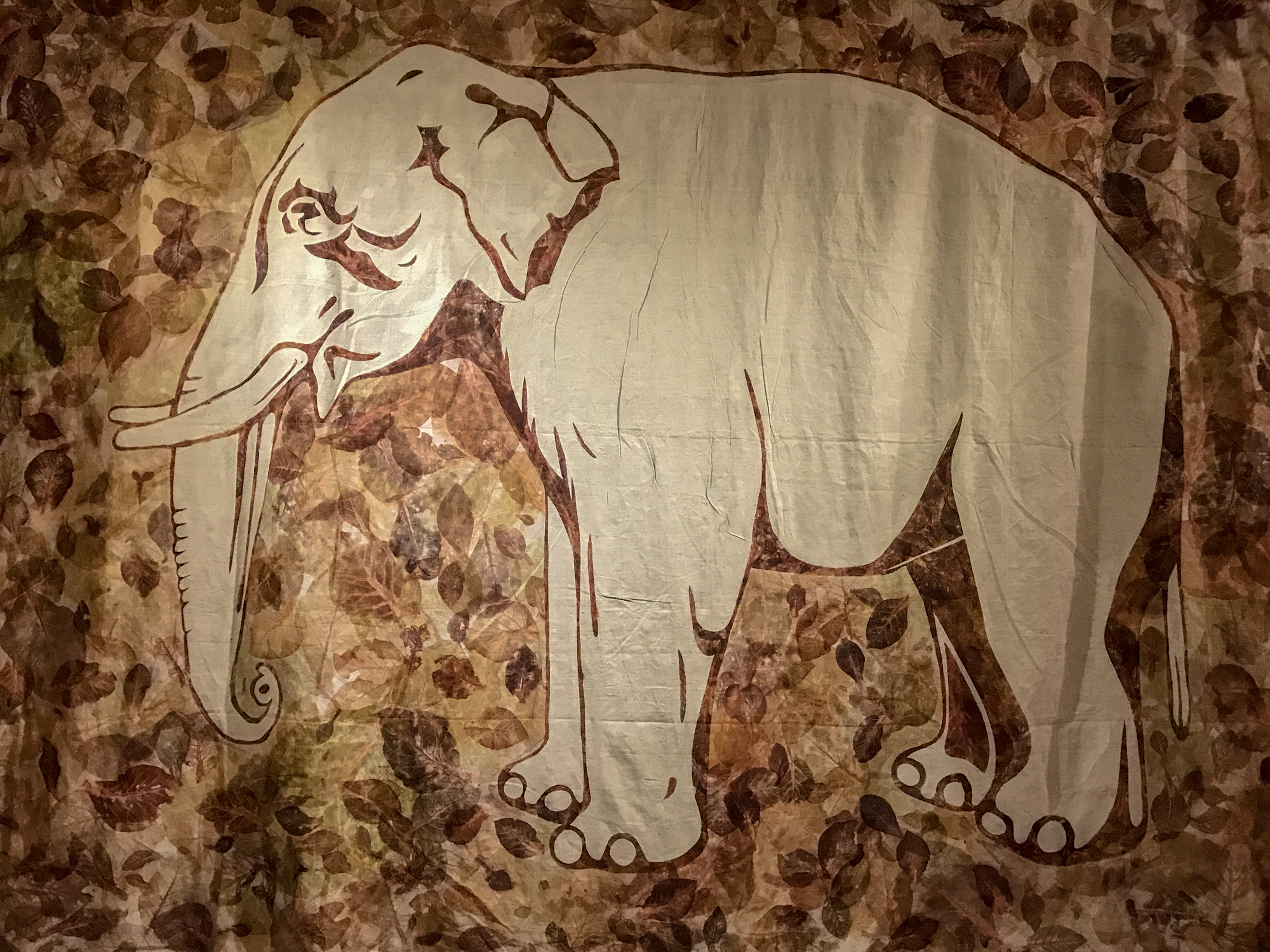 Elephant In The Room is a botanical hammered print from teak leaves on linen canvas of the life-size Asian elephant. The design was borrowed from the official white elephant Siamese (now Thailand) flag used by King Chulalongkorn’s visit at Grenen, Denmark on the 4th of July 1907 – the first official flag used abroad.

Very young teak leaves were harvested during the beginning of rainy season outside Chiang Mai city, the capital ancient kingdom of Northern Thailand. The fresh leaves were then sandwiched between linen canvas, and hammered. The dark green leaves were hit until the organic red pigment seeped into the fiber of the canvas.

IN-TRANSIT : in the process of being transported

Ong Siraphisut is a Thai artist, but as to what that qualifier even means is the core conceptual inquiry of this exhibition. In Transit tells the story of a shared identity within a particular nation-state – Thailand – and how this shared identity came about. By emphasizing the links between historical fact and present day belief, Siraphisut intends to spotlight the manufactured nature of both nationalism and Thainess.

The works on display feature pigments derived by the artist from locally available materials, such as chili peppers and teak leaves. While the processes and techniques used in creating these works pay homage to textile dyeing traditions of the past, it is his synthesis of specific materials and iconography which reference major historical events that have shaped Thai national identity today. The Columbian exchange, European imperialism, global capitalism, and ‘modernizing’ state-making initiatives of bureaucratic elites are all alluded to in these works. Siraphisut plays with tropes that seemingly reflect Thainess in an examination of their legitimacy. In such a way, In Transit stand to question the legitimacy of our own claims to nationhood.

In-Transit consists of two projects, the Elephant In The Room and Who’s Afraid Of Red?

The flag of the Kingdom of Thailand shows five horizontal stripes in red, white, blue, white and red. The colours are said to stand for nation-religion-king, an unofficial motto of Thailand, red for the land and people, white for religions and blue for the monarchy, the last having been the auspicious colour of King Rama VI. As the king declared war on Germany in 1917, some note the flag now bore the same colours as those of the UK, France, Russia and the United States. 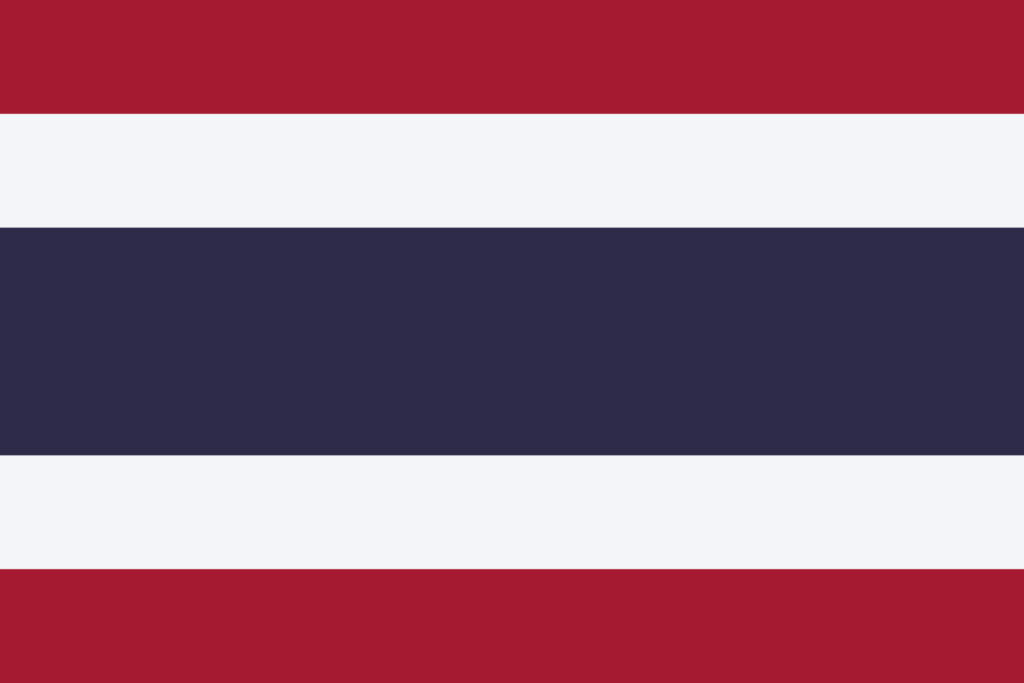 According to legend of the first Siamese flag, foreigners who come by ships who wanted to go to Ayutthaya (the ancient capital of Siam in 17th century) must pass Chao Phraya river. The general custom was that foreign ships would raise their kingdom or country flags to show their arrivals, and the host would raise their own flag in response for welcoming.

When the French ship came to Siam the first time, she raised her flag. But a Siamese officer didn’t understand the custom. He responded with a Dutch flag, which was French’s enemy at the time. The French were surprised and didn’t response with their arrival until another Siamese officer brought down the Dutch flag and replaced it with a red piece of cloth he found nearby. That was the accidental beginning of the first Siamese flag that were used by both royal or citizen boats and forts throughout the Ayutthaya Kingdom.

Then when Chakkri dynasty began after the collapse of Ayutthaya, King Rama I added a white chakra on the red background (the weapon of the Hindu god Vishnu, which is also used as the symbol of the House of Chakri). Later on he also added a white elephant inside the chakra. This flag was used only for the royal transportations. Citizens still used the plain red flag.

Officially the first flag was created in 1855 by King Mongkut (Rama IV), showing a white elephant (a royal symbol) on red ground. As the plain colored flag was not distinct enough for international relations. He took the chakra out, so anyone could use it, both royal and citizen. This is the first version of the flag that anyone in Siam could use since the beginning of Chakri dynasty.

King Vajiravudh (Rama VI) saw the elephant flag hanging upside-down, and to prevent this from happening again created a new flag which was symmetrical. Later in 1917, the middle colour was changed to dark blue, which was similar in tone to indigo, which at the time was regarded as the auspicious colour for Saturday, the day King Vajiravudh was born. According to other sources, the blue colour was also chosen to show solidarity with the Allies of World War I, which also had the colours blue-red-white in their flags.

The design of Elephant In The Room is borrowed from the official white elephant Siamese flag used by King Chulalongkorn’s visit at Grenen, the outmost northern part of Jutland in Denmark on the 4th of July 1907.

King Chulalongkorn or King Rama V of Siam, now Thailand, was accountable for opening up the country for more liberal trading with western commercial firms, leading to the modernization of Siam in the 1850s. The aim of his reforms was to avoid the western colonization of Siam, which was a success.

This version of the elephant flag representing the vision of Siam was trying to be modernized with the most realistic design of the elephant. It’s also an artifact of foreign interaction of the old kingdoms. This plain elephant flag was used with no hierarchy, comparing to the older versions that were associated and could be used only with the royals and monarchy.